Hard-Earned Top-10 for Harvick at Atlanta 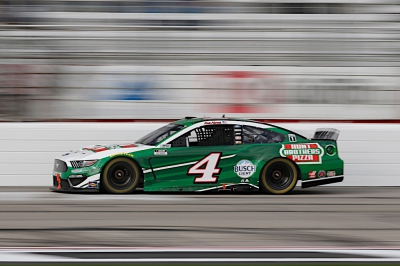 ●  By just the second tour around the 1.54-mile oval, Harvick had the No. 4 Hunt Brothers Pizza Ford Mustang in second place.

●  Kyle Larson passed Harvick on lap 10 to take second. Harvick ran in third through the competition caution on lap 25.

●  Harvick pitted for four tires and fuel with a track bar adjustment on lap 27.

●  Just before taking the green for the lap-31 restart, Harvick had to pit to replace a flat left-rear tire. A broken valve stem was the culprit.

●  Harvick rejoined the race in 32nd and was on the tail end of the lead lap.

●  “Chattering the front tires, which is absolutely absurd at Atlanta,” said Harvick on lap 51.

●  Made scheduled, green flag pit stop on lap 64 for four tires and fuel with a right-rear chassis adjustment.

●  “We’re going to have to get some grip in the car. As soon as I turn the wheel, it snaps sideways,” said Harvick on lap 92.

●  Finished the stage in 24th, the fifth car one lap down to the leaders.

●  Pitted for four tires and fuel, along with a track bar and left-rear chassis adjustment, upon the conclusion of the stage.

●  Harvick chose the top line for the restart and said, “It’s terrible on the top getting going.”

●  The caution came out shortly thereafter for Kurt Busch getting into the turn one wall, and Harvick lined up 22nd for the lap-119 restart. He was third in line among the lap-down cars.

●  Made scheduled, green flag pit stop on lap 160 for four tires and fuel.

●  Harvick was 21st and the first car one lap down by lap 164, eligible for the “Lucky Dog” if the caution flag waved.

●  Finished the stage in 20th, the fifth car one lap down with only 14 cars on the lead lap. “Still need more grip,” said Harvick.

●  Pitted for four tires and fuel at the end of the stage. Only adjustments were to tire pressures.

●  Began the final stage as one of six cars one lap down.

●  Fortuitous caution on lap 221 allowed Harvick to take wave-around and get his lap back. Restarted 17th on lap 225.

●  Kyle Busch passed Harvick on lap 234 to send the Hunt Brothers Pizza driver back to 16th, but Harvick regained the position on lap 239 by getting around Joey Logano.

●  Made scheduled, green flag pit stop on lap 268 for four tires and fuel.

●  Harvick earned his fifth top-10 of the season and his series-leading 16th top-10 in 31 career NASCAR Cup Series starts at Atlanta.

●  This was Harvick’s second straight top-10. He finished sixth in last week’s race at Phoenix Raceway.

●  Ryan Blaney won the Folds of Honor 500 to score his fifth career NASCAR Cup Series victory, his first of the season and his first at Atlanta. His margin over second-place Kyle Larson was 2.083 seconds.

●  There were five caution periods for a total of 25 laps.

●  Denny Hamlin remains the championship leader after Atlanta with a 43-point advantage over second-place Larson.

The next event on the NASCAR Cup Series schedule is the Food City Dirt Race on Sunday, March 28 at Bristol (Tenn.) Motor Speedway. The race begins at 3:30 p.m. EDT with live coverage provided by FOX and SiriusXM NASCAR Radio.