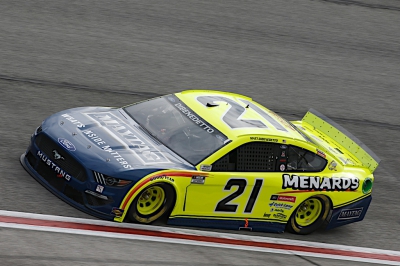 Matt DiBenedetto and the No. 21 Menards/Maytag team had their best run of the 2021 season in Sunday’s Folds of Honor/QuikTrip 500 at Atlanta Motor Speedway, coming away with an 11th place finish.

DiBenedetto lined up 20th for the start of the 325-lap race and was on the move from the drop of the green flag. He had climbed to 12th place when the competition caution flag flew on Lap 25.

He cracked the top 10 for the first time on Lap 31 and raced around 10th place for the remainder of the first 105-lap Stage, finishing that segment of the race in 12th place.

At the start of Stage Two, he used some bold moves on restarts to work his way into the top five and ran as high as third before finishing that segment in sixth place, earning five Stage points.

In the third and final segment of the race, he ran in the top five early on, then lost a few spots in the latter stages, finally ending up 11th at the finish.

“We had a solid race from start to finish with our Menards/Maytag Mustang,” DiBenedetto said. “Our pit crew did a great job keeping our track position, which took some hard work on their part, and we were able to get some Stage points, which was good.

“We got a little loose at the start of the third Stage, and that may have cost us a spot or two, but we had a 10th place car pretty much all day, then gained some track position that got us further up for a while. Overall, it was a solid day. I can’t complain.”

DiBenedetto also said the No. 21 team is steadily overcoming a slow start to the season.

“It started at Las Vegas,” he said. “We had a great car there. Since then we’ve had some well-prepared cars and some good, solid races.”

On Sunday, DiBenedetto was one of six Ford drivers, led by race winner Ryan Blaney, to finish in the top 15. Blaney’s win extended Ford’s win streak in AMS Cup races to five.

Eddie Wood said he was proud of the efforts of the Menards/Maytag team and the entire Ford contingent.

“Matt drove a good race and did a good job managing his tires,” Wood said. “[Crew chief] Greg Erwin made good strategy calls, and the pit crew had good stops all day.

“It was a really good day for us, and we’d like to congratulate our Ford teammates Ryan Blaney and his team on a big win.”

DiBenedetto and the No. 21 team now head to Bristol Motor Speedway, where the Cup Series will race on a dirt surface for the first time since 1970.