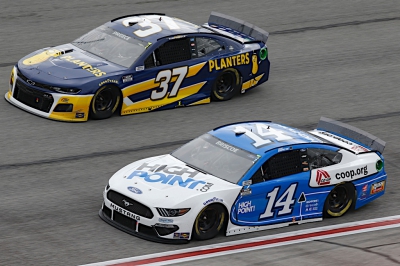 ● The HighPoint.com/CO-OP Financial Services driver reported his Ford Mustang was too loose on entry into turn one on lap 25, just before the yellow flag waved signaling the competition caution. Briscoe pitted on lap 27 for four tires, fuel and adjustments and restarted 24th on lap 30.

● Green-flag stops began on lap 62 with Briscoe eventually giving up the sixth position on lap 66 when he pitted under green for four tires, fuel and adjustments. He returned to the track in the 28th position, one lap down to the leaders.

● On lap 94, Briscoe radioed to the team that he was “wrecking loose” while racing in the 28th position.

● At the conclusion of Stage 1, Briscoe brought his HighPoint.com/CO-OP Financial Services Ford Mustang to pit road for four tires, fuel and air pressure and chassis adjustments.

● Briscoe began the second stage in the 28th position and reported early in the run that he was too free on entry and through the corner.

● On lap 157, the No. 14 team made a scheduled green-flag stop for four tires, fuel and adjustments and returned to the track in 26th.

● Briscoe worked his way to the 24th position on lap 170 before his HighPoint.com/CO-OP Financial Services Ford Mustang became too tight. He slipped back to the 25th position, two laps down to the leaders by the end of the second stage on lap 210.

● Under caution at the stage break, Briscoe pitted on lap 214 for four tires, fuel and adjustments.

● The HighPoint.com/CO-OP Financial Services driver was riding 25th two laps down when the fifth caution of the race occurred on lap 221. With only eight laps on his tires, Briscoe stayed on track as the leaders pitted to earn back one lap. He restarted 24th, one lap down, on lap 224.

● Briscoe was running 23rd on lap 267 when the leaders began making their final scheduled green-flag pit stops. He pitted one lap later for tires and fuel and returned to the track in 26th.

● Briscoe made his way up to the 22nd position, but as he was battling for position on the final lap, a slower car moved into his lane, causing the No. 14 to cross the finish line in 23rd.

“Our balance was kind of off all day, but our HighPoint.com/CO-OP Financial Services Ford Mustang was pretty good that last run. We were just too far behind to do much with it by then. Other than that, we had a nice clean race and we’ve learned a lot that we’ll be able to bring back in July. I’m pretty excited to get to Bristol and do some dirt racing next week. Maybe that’s what we need to turn things around.”

The next event on the NASCAR Cup Series schedule is the Food City Dirt Race on Sunday, March 28 at Bristol (Tenn.) Motor Speedway. The race begins at 3:30 p.m. EDT with live coverage provided by FOX and SiriusXM NASCAR Radio.