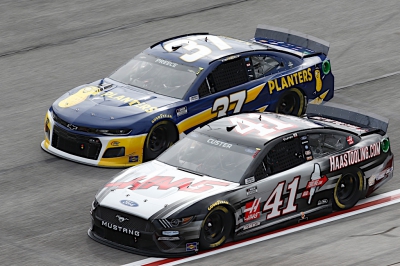 ● The HaasTooling.com Ford made gradual forward progress from the drop of the green flag and was up to 18th place by the lap-25 competition caution. Custer said his racecar started out tight but then was good, pretty balanced, over the final 10 laps of the run. He pitted for four tires and fuel and a “small air-pressure adjustment” and restarted 17th when the race went back to green on lap 30.

● Custer was told the tires that came off during the competition caution looked good, like they had another 25 laps left in them. “This could be fun,” said crew chief Mike Shiplett.

● Again, Custer was able to make steady forward progress and raced his way up to 13th before heading to pit lane for a scheduled stop under green on lap 64. He settled into 16th place when the field completed the round of green-flag stops.

● The run to the end of the stage started with Custer dealing with a tight in corner center issue, and he was never able to make forward progress. He pitted during the stage break for four tires, fuel and air pressure and a left-rear track bar adjustments.

● The caution flag flew for a single-car incident in turn one on the lap-112 start to the stage. The HaasTooling.com Ford stayed on track and restarted 13th on lap 118. Custer reported he was tight the entire run before pitting under green from 15th place for a scheduled stop on lap 158. He took fuel, tires and air pressure adjustments and was in 16th when the field completed the round of green-flag stops.

● Continuing to struggle with the tight condition, Custer held onto 16th place for the remainder of the stage. He pitted during the break for four tires, fuel and air pressure and chassis adjustments. Before pitting, he said he was starting to find some grip and anticipated the track was going to change considerably during the final stage.

● The No. 41 HaasTooling.com Ford Mustang dropped one position during the opening green-flag laps of the stage before the caution flag appeared on lap 220 for fluid on the track. Custer stayed out to take the wave-around back to the lead lap and restarted 16th on lap 224.

● After dropping a pair of positions during this latest long, green-flag run, Custer was called to the pits on lap 266 for fuel, tires and air-pressure adjustments. He said the handling of his HaasTooling.com Mustang was “not bad, maybe just a tick tight.” He was 17th when the rest of the field completed the round of green-flag stops.

● Custer fought hard the rest of the way and dropped one position before the checkered flag.

● Denny Hamlin remains the championship leader after Atlanta with a 43-point advantage over second-place Kyle Larson.

“Well, that was definitely not the result we wanted, but I would call it a solid day in a lot of respects. We made improvements on our HaasTooling.com Mustang all day but just couldn’t get going on the restarts for the life of me. Still, proud of all the hard work by Mike (Shiplett, crew chief) and everyone on this HaasTooling team. This is a tough track to get your car right. We’ll go get ’em on the dirt at Bristol next week.”