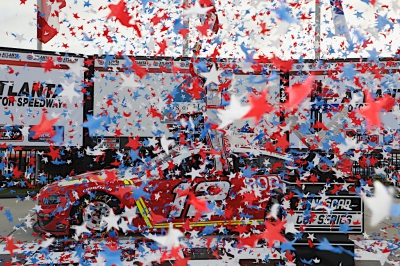 Kyle Larson, who dominated most of Sunday’s race came up just short of his second win in a row.

Blaney closed on Larson at the end of the race and took the race lead from him with nine laps remaining in the race. Driver No. 12 would go on to win by a 2 second margin over Larson who would finish second.

“We had a great long run car all day,” Blsney told Fox Sports post-race. “It took us a little bit to get going. I was pretty free all day. We made a really good change to tighten me up where I needed it and it looked like Kyle was getting loose.

Larson, who finished second won both stages and led a race-high 269 laps.

Rounding out the top five were Kyle Larson in second, Alex Bowman in third, Denny Hamlin in fourth and and Kyle Busch in fifth.

Rounding out the top ten were Austin Dillion in sixth, Chris Buescher in seventh, William Byron in eighth, Martin Truex Jr. in ninth and Kevin Harvick in tenth.

The NASCAR Cup Series will head to Bristol Motor Speedway on Sunday, March 28 at 3:30 p.m. Eastern on FOX. This will mark the first time since 1970 that NASCAR’s premier series will race on dirt.