Buescher Fights Back for 18th-place Finish at Phoenix 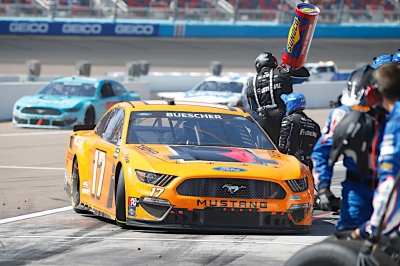 After battling the handling on his race car all day, Chris Buescher and the No. 17 Roush Performance Ford team worked their way up to an 18th place finish at Phoenix Raceway on Sunday Afternoon.

Buescher rolled off the grid 17th but began to lose positions in the early laps with reports of an extremely tight Ford Mustang. The team pitted with the competition caution at lap 32 for fuel, four tires, air pressure and track bar adjustment. The driver restarted 21st on the bottom lane and was moving forward when he narrowly avoided a wreck at lap 46. The team stayed out under the caution to gain track position and restart 14th. By lap 64, he was shuffled back to 28th and ultimately finished stage one in 29th.

At the stage break, Buescher reported that his Ford Mustang was still very tight and the team took four tires, and fuel while making another track bar change and air pressure adjustment. The driver restarted 23rd on the bottom line and held track position until another caution came out at lap 89. The team pitted for four tires, fuel and a track bar adjustment. After restarting 26th, Buescher worked his way up to 20th despite a series of cautions. However, handling continued to hamper the Ford and with 13 to go in the stage Buescher lost a lap and finished the stage 24th.

The No. 17 team went to work for the final stage in Phoenix with adjustments to fix a vibration and tight handling Ford. After restarting 24th, the Prosper, Texas native toggled between 23rd to 26th, eventually losing a second lap to the leaders. At lap 261, the team stayed out with a caution to take a wave around and gain a lap back. After restarting 25th, Buescher held position until a late race caution at lap 281 enabled the team to be back on the lead lap. The team made one final pit stop for fuel, tires and an air pressure adjustment to restart 22nd. With a little less than 30 to go, Buescher made the most of the last laps of the race, gaining four spots to take the checkered flag 18th.

The No. 17 team returns to the track next Sunday, March 21 at Atlanta Motor Speedway at 3 p.m. EST on FOX, PRN and SiriusXM Channel 90.