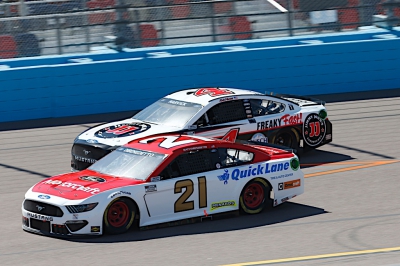 The climb back from a disappointing start to the 2021 Cup Series season for Matt DiBenedetto and the No. 21 Motorcraft/Quick Lane team continued on Sunday with a 14th place finish in the Instacart 500 at Phoenix Raceway.

DiBenedetto’s finish, plus a Stage point earned for a 10th place finish in the first Stage, allowed him to continue his methodical climb in the points standings. He heads to Atlanta Motor Speedway 28th in the standings, a gain of seven spots in the past two races. Now, he’s just 24 points behind 20th place Cole Custer.

DiBenedetto was set to start 20th at Phoenix, but moved up three rows for the green flag after drivers ahead of him were sent to the rear for rules infractions.

He moved to 10th place after just 12 laps and stayed inside the top 10 for most of the first Stage before ending that 80-lap segment in 10th place.

The second Stage saw DiBenedetto and the Motorcraft Mustang fall just outside the top 10, but still finish 12th at the end of that segment.

The team continued to deal with handling issues at the start of the final segment, with DiBenedetto reporting that the car was tight in the centers of the corners, and free on the entry and exit.

Crew chief Greg Erwin and the Motorcraft/Quick Lane crew were able to adjust the car, correcting some of the issues. After running outside the top 20 in the early laps of the third Stage, DiBenedetto began to regain lost positions. A final pit stop with 25 laps remaining provided one last opportunity for adjustments, and he was able to move from 17th position at the start of that run to 14th at the finish.

It was his best finish of the five races to date.

“We just couldn’t get our Motorcraft/Quick Lane Mustang to where we needed it,” DiBenedetto said. “It wasn’t quite as good as it was here last fall. We weren’t bad, but we weren’t great.

“We had one run at the start of the last Stage that kind of set us back, and we couldn’t quite recover from it.

“Earlier we’d run between eighth and 11th so if we’d had better track position at the end we probably could have finished a few spots better than 14th.

“We’ll take what we got and move on to the next one.”

Eddie Wood said he likes seeing his team make progress, even if the finishes aren’t what he believes the team is capable of.

“We weren’t blazing fast, but we weren’t terrible either,” he said. “We have some work to do, but if we can keep clicking off top-15 finishes, it’s a good thing.”

The 2021 Cup Series campaign continues with next Sunday’s Folds of Honor/QuikTrip 500 at Atlanta Motor Speedway.