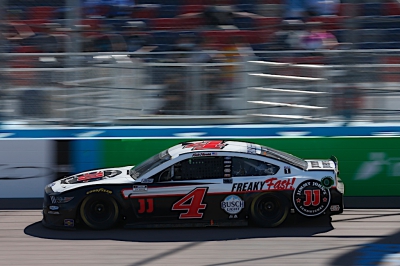 ●  “Need some drive off turn two. Too tight through the center off (turn) three,” said a ninth-place Harvick during competition caution on lap 31.

●  Pitted on lap 32 for four tires and fuel. Made a right-rear chassis adjustment and removed some tape from grille. The quick pit work gained Harvick five spots.

●  “Those first 10 laps I was pretty loose, but then it came into it pretty well,” said Harvick about his Jimmy John’s Ford during a caution on lap 47.

●  Harvick stayed out during the caution period and restarted fifth on lap 51.

●  Pitted for four tires and fuel with some tire pressure adjustments at the end of the stage.

●  The No. 4 Jimmy John’s Ford Mustang held steady in seventh through a caution on lap 90.

●  Lined up eighth for lap-99 restart and, after falling back to 10th at one point, got back up to seventh place by lap 114.

●  “Loose off of (turn) two,” said Harvick on lap 131 after getting passed by Martin Truex Jr.

●  Made scheduled, green flag pit stop on lap 140 for four tires and fuel.

●  After pit stops had cycled through by lap 158, Harvick was back to seventh.

●  “The longer I run, the tighter it gets to the center (of the corner),” said Harvick on lap 183 while running sixth.

●  “I’ve got no bite off the exit of (turn) two. Getting that way of (turn) four too,” said Harvick prior to the end of the stage.

●  Pitted for four tires and fuel with a right-rear chassis adjustment upon conclusion of the stage.

●  The No. 4 Jimmy John’s Ford Mustang was fifth by lap 200 but dropped to ninth by lap 203. Harvick was in a three-car battle with Kyle Larson and Christopher Bell for seventh.

●  “I can’t put the throttle down on exit on either end,” said an eighth-place Harvick on lap 248.

●  By lap 255, pit stops had cycled through and Harvick had gained a spot to run seventh.

●  “It definitely felt better on exit,” said Harvick about his Jimmy John’s Ford during a caution on lap 262.

●  Crew chief Rodney Childers took advantage of the caution and brought Harvick to pit road on lap 265 for four tires and fuel.

●  Harvick pitted for four tires, fuel and a right-rear chassis adjustment during a caution on lap 284.

●  Harvick passed Kyle Larson for sixth on lap 306 and held the spot through the end of the race.

●  Harvick earned his fourth top-10 of the season and his series-leading 26th top-10 in 37 career NASCAR Cup Series starts at Phoenix.

●  Martin Truex Jr., won the Instacart 500k to score his 28th career NASCAR Cup Series victory, his first of the season and his first at Phoenix. His margin over second-place Joey Logano was 1.698 seconds.

●  Twenty-four of the 38 drivers in the race finished on the lead lap.

●  Denny Hamlin remains the championship leader after Phoenix with a 39-point advantage over second-place Brad Keselowski.

Kevin Harvick, driver of the No. 4 Jimmy John’s Ford Mustang for Stewart-Haas Racing:

The next event on the NASCAR Cup Series schedule is the Folds of Honor 500 on Sunday, March 21 at Atlanta Motor Speedway. The race begins at 3 p.m. EDT with live coverage provided by FOX and SiriusXM NASCAR Radio.