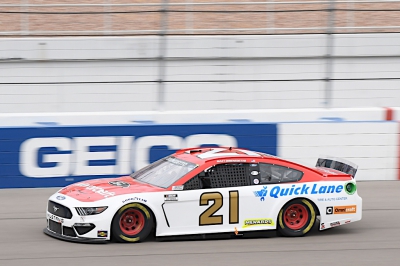 The 2021 season finally took a positive turn for Matt DiBenedetto and the No. 21 Motorcraft/Quick Lane team, and they were able to leave Las Vegas Motor Speedway with a 16th-place finish.

DiBenedetto and his No. 21 Mustang put on a display of speed early in Sunday’s Pennzoil 400 as he drove from his 30th starting position to ninth place in the first 30 laps of the 267-lap race.

He continued to maintain his spot among the top 10 until the end of the first 80-lap Stage, where he finished eighth and collected three Stage points, his first of the 2021 season.

In Stage Two, he continued his climb forward and was in third place by Lap 91.

An attempt to run long in the second Stage was quickly determined to be not worth the risks, and the Motorcraft/Quick Lane crew called DiBenedetto to the pits for a green-flag stop. When the pit stops cycled through, he was in 12th place and finished Stage Two in that position.

In the final 100 laps of the race, DiBenedetto was among the top 10 for the majority of the laps, and was running ninth when he headed to pit road with just over 40 laps left to run.

As the Motorcraft crew serviced the No. 21 Mustang, an air gun failed just as the left-front tire was about to be changed.

Crew chief Greg Erwin elected to send DiBenedetto back on the track with three fresh Goodyear tires and one with 50 laps of wear on it rather than lose time – and positions – getting a replacement gun to change the tire.

The conventional wisdom is that a racing tire won’t last for 90 laps at speed at Las Vegas, but DiBenedetto nursed his well-worn tire to the finish, losing only a handful of positions during that long green-flag run.

His 16th-place finish was his best of 2021, and offered encouragement that the team has the speed to compete for wins and top-10s throughout the remainder of the schedule.

“We had good speed, about a seventh-place car,” DiBenedetto said. “We were solid all day. We had an air gun break, which was something out of our control, nobody’s fault.”

Eddie Wood said that overall he was happy with his team’s day at the races.

“I’ll take it,” he said. “I think we’ll be all right going forward. If we can run that good at Vegas, we can run good at places like Texas and other intermediate tracks too.

“And I want to hand it to Goodyear. That was a job well done to build a tire that would run 90 laps and still be running respectable lap times in the last few laps.”