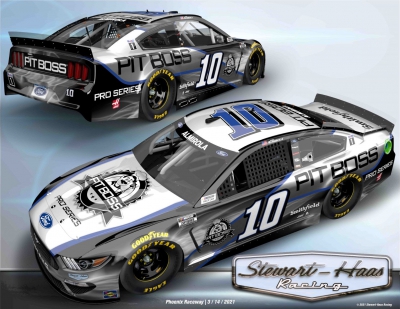 Pit Boss Grills, the fastest growing brand in the grilling industry, aims to go even faster by partnering with NASCAR Cup Series driver Aric Almirola and the No. 10 team of Stewart-Haas Racing (SHR).

“There isn’t a better fit for our program than this partnership with Pit Boss Grills,” Almirola said. “This is my 10th year racing for Smithfield, so grilling is an established part of my lifestyle, both at home and at the track. The same is true with NASCAR fans. Morning, noon and night, they’ve got their grills going. We’ve brought them a lot of Smithfield product over the years, and now we can show them how to go the extra mile with Pit Boss Grills.”

Almirola is a two-time winner in the NASCAR Cup Series and Phoenix and Atlanta have proven to be strong tracks for the Tampa, Florida, native. Almirola has six top-10 finishes at Phoenix, and four of them have come since joining SHR in 2018. Atlanta is one of the fastest tracks in NASCAR, and Almirola earned the pole there in 2019, lapping the 1.54-mile oval in just a tick over 30 seconds at an average speed 181.473 mph.

“We are blessed to partner with Aric Almirola and the entire No. 10 team,” said Jeff Thiessen, President, Dansons, Inc. “Aric is a family man who values relationships, and a Christian athlete who is competitive on the track. Not only does he embody our company’s values, but his race fans are our consumers. Whether tailgating at a track or getting together in the backyard, Aric’s fans and NASCAR fans are extremely brand loyal. We’re loyal to grilling by creating the best products at an affordable price, and this partnership aims to deliver that message.”

Dansons, Inc., which manufactures Pit Boss Grills, was founded in 1999. The Phoenix-based company provides its customers with world-class, competitive and innovative products across its lineup, including wood pellet grills, charcoal grills, spices and accessories, as well as gas grills and vertical smokers.

Pit Boss Grills is already very familiar with NASCAR, as the brand is the Official Grill of NASCAR, a title it’s had since 2018. More recently, Pit Boss Grills announced its title sponsorship of the May 22 NASCAR Xfinity Series race at Circuit of the Americas (COTA) in Austin, Texas – the inaugural Pit Boss 250.