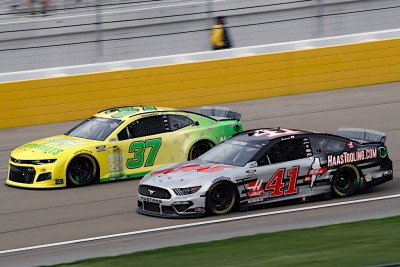 ● The HaasTooling.com Ford struggled to find rear grip during the opening 25-lap run to the scheduled competition caution. He dropped five positions to 25th by lap 15, then picked up a position by the time the caution flag flew. “The back is just not planted in the track at all,” Custer said before pitting for four tires and fuel, a right-rear track adjustment and packer pulled from the left front. He restarted 23rd when the race resumed on lap 30.

● The next run started well as Custer jumped six positions to 17th on the restart lap. He reported the adjustments “fixed about half the problem. It helped the front turn but didn’t help the rear grip.”

● The caution flag flew on lap 46 for debris on the frontstretch with Custer having dropped back to 24th. He said the previous changes tightened up the center of the corner but he was still loose on entry and exit. He pitted for tires and fuel and significant changes on both ends of the car – rear track-bar and wedge adjustments, and packer removed from both front corners. He restarted 26th on lap 51.

● Custer netted one position in the 29-lap run to the stage’s end and reported the most recent changes fixed about half the loose condition on corner entry and exit without hurting his ability to turn in the center. He pitted during the break for tires, fuel and air-pressure and left-rear track-bar adjustments.

● The HaasTooling.com Ford still struggled with rear grip issues as it drifted to 27th by the time the leaders began making green-flag pit stops on lap 124. Custer said his biggest problem by far was a loose condition on corner entry and exit. Custer was up to sixth place as one of the last to make his green-flag stop on lap 131. He took four tires and fuel and air-pressure adjustments. He was 28th when the remainder of the field finished the round of green-flag stops on lap 147.

● Custer said the track-bar changes made on the previous stop helped during the run, but he still asked for help entering the corners aggressively, and the rear grip issues still persisted. He pitted during the stage break for four tires, fuel and a left-rear track-bar adjustment.

● The No. 41 HaasTooling.com Ford Mustang had dropped a pair of positions by the time the caution flag flew for a single-car incident on lap 170. Custer said his racecar was slightly better on the restart. He asked for more help with rear grip, pitted for fuel only and another left-rear track-bar adjustment and restarted 29th on lap 174.

● Another caution flag appeared on lap 179 for a single-car incident with Custer running 28th. The first car one lap down, he was the beneficiary of the free pass back to the lead lap. He asked for twice the changes made on the previous stop to improve his rear grip. The No. 41 HaasTooling.com Ford Mustang got four tires and fuel, as well as track-bar and right-front packer adjustments, and restarted 28th on lap 184.

● Again one of the last to stop under green, Custer was up to second place when he was called to the pits on lap 129. He took four tires and fuel and adjustments to continue trying to remedy being loose on corner entry and exit condition.

● Custer was in 27th place when the round of green-flag stops was complete and picked up a pair of positions before the checkered flag.

● Kyle Larson won the Las Vegas 400 to score his seventh career NASCAR Cup Series victory and his first at Las Vegas. His margin over second-place Brad Keselowski was 3.156 seconds.

● There were six caution periods for a total of 30 laps.

● Denny Hamlin remains the championship leader after Las Vegas with a 38-point advantage over second-place Keselowski.

“That was not the day we were looking for. It was a struggle all day to find rear grip, and we couldn’t attack the corners the way we wanted to on entry and exit. We’ll do everything we can to improve our performance for the next one. We have a lot of season left.”