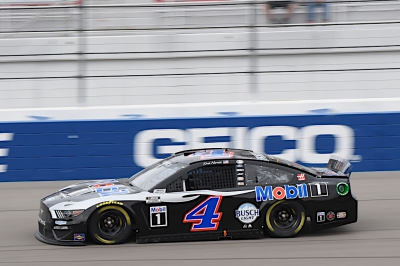 ●  The No. 4 Mobil 1 Ford Mustang was fifth after two laps when it was forced into the middle of a three-wide phalanx of cars.

●  “Plowing tight,” radioed Harvick on lap eight shortly after dropping out of the top-10.

●  “No rear grip. Too tight to the center. Terrible in traffic,” said Harvick on lap 12 while running 11th.

●  Harvick rejoined the top-10 on lap 14 with a pass of Michael McDowell.

●  “Chattering the front tires. No grip with the rear of the car. Just bad everywhere,” said Harvick during competition caution on lap 26.

●  Harvick pitted for four tires and fuel on lap 28. Track bar and wedge adjustments were also made to aid the car’s handling.

●  Contact with another car on lap 32 slightly damaged the left-front fender of the Mobil 1 Ford Mustang, causing an intermittent tire rub.

●  Harvick dropped to 25th by lap 35 as the left-front fender damage adversely affected the car’s aerodynamics.

●  “It still needs to turn better, but I don’t know how much is because of that fender,” said a 23rd-place Harvick while under caution on lap 47.

●  As Harvick came to pit road on lap 48, his left-front tire was flat, making the caution period very timely for the Mobil 1 team.

●  Pitted on lap 49 for four tires and fuel. Removed a spring rubber, took some tape off the grille and worked on left-front fender.

●  “Sideways off the corner. No rear grip,” said Harvick about his racecar at the end of the stage.

●  Pitted for four tires and fuel, with wedge and tire pressure adjustments, at the conclusion of stage.

●  “It’s so much tighter it’s not even funny. Plowing tight!” said Harvick on lap 93 while running 15th.

●  Made scheduled, green flag pit stop for four tires and fuel with a chassis adjustment on lap 123.

●  “It goes OK for a couple laps, then it turns loose. It’ll turn through the center of the corner until the tires wear out, then it plows,” said Harvick of his car after finishing 16th in the stage.

●  Pitted for four tires and fuel, with chassis and tire pressure adjustments, at the conclusion of stage.

●  “It just takes off tight on restarts. The splitter touches the ground and I have to lift on entry. That’s when everyone catches me,” said Harvick during the caution period.

●  Harvick pitted for four tires and fuel with some more chassis adjustments while under caution on lap 181.

●  Was 22nd for lap-185 restart after many drivers opted not to pit and gain track position.

●  Made scheduled, green flag pit stop for four tires and fuel on lap 226.

●  Harvick held the Mobil 1 Ford steady in 20th through the end of the race.

The next event on the NASCAR Cup Series schedule is the Instacart 500k on Sunday, March 14 at Phoenix Raceway. The race begins at 3:30 p.m. EST with live coverage provided by FOX and SiriusXM NASCAR Radio.