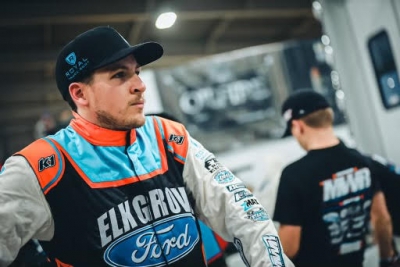 As NASCAR Cup Series teams travel to Las Vegas Motor Speedway this weekend for the fourth points race of the season, Matt Wood announced that he’s betting on his veteran sprint car driver, Shane Golobic, when the series takes to the dirt at Bristol Motor Speedway later this month.

Matt Wood Racing has partnered with NASCAR Charter Team, Live Fast Motorsports, to enter Golobic in the Food City Dirt Race on Sunday, March 28th. The event will be the first time that the NASCAR Cup Series has raced on dirt since 1970. Although racing on dirt will be new for a lot of the drivers entered in the race, dirt racing veteran, Golobic, sees it as another opportunity to continue building on his already impressive career, this time in one of NASCAR’s most highly anticipated events of the year.

“I believe every racer has dreamed of the opportunity to race in the NASCAR Cup Series, and the fact that it’s going to happen on dirt at Bristol Motor Speedway only makes it sweeter,” Golobic said. “This opportunity honestly fell into our lap out of nowhere, and it’s something you just can’t pass up. I am so thankful for everyone involved in making this happen, as well as everyone who has had a hand in helping me get to this point in my career. I hope to represent all of our supporters to the best of my ability, and I can’t wait to see what we can do on the dirt at Bristol!”

Matt Wood, President of Matt Wood Racing & Promotions, echoed Golobic’s comments. “Sometimes something falls in your lap that's just too good to be true,” Wood said. “Partnering with Matt Tifft and BJ McLeod of Live Fast Motorsports to run Shane in the NASCAR Cup Series is one of those deals. I think it's every person's dream that's ever owned a race team to be a part of a NASCAR Cup race. This is definitely one of those items you put in your bucket that you think you will never check off the list.”

“We are thrilled to have Shane Golobic join Live Fast Motorsports at the Bristol dirt race,” Matt Tifft, co-owner of Live Fast Motorsports said. “This is such a historic event for the Cup cars to race on dirt once again and for the first time at Bristol. We couldn’t have thought of anyone better to join our team with all of Shane’s background in the dirt racing world, and we can’t wait to see the show that he and the NASCAR Cup Series puts on in just a few weeks.”

“I'm very excited for Shane… obviously, he knows his way around dirt,” said Wood. “I think this will be an opportunity for him to showcase that talent on one of the World's biggest stages. I'm very proud of what we have accomplished with our Sprint Car and Midget program. This will be completely new experience for us. Hopefully we can do more in the future with Matt, BJ and Live Fast Motorsports.”

Live Fast Motorsports co-owner, BJ McLeod, added, “We are so excited to work with Matt Wood and have Shane in the car at the Bristol dirt race. The race itself is going to be nothing short of entertaining, so to have Shane behind the wheel of our car makes it even more special for us as a new NASCAR Cup Series team.”

Sponsorship opportunities are still available on the LFM No. 78 for the NASCAR Cup Series dirt race at the World’s Fastest Half-mile. For more information, send inquiries to This email address is being protected from spambots. You need JavaScript enabled to view it..