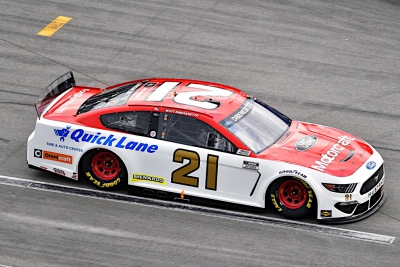 With a mostly disappointing month of February behind them, Matt DiBenedetto and the No. 21 Motorcraft/Quick Lane team are anxious to move into the month of March, beginning with this weekend’s Pennzoil 400 at Las Vegas Motor Speedway.

“Even before the season started I was looking forward to March,” DiBenedetto said. “This is the start of a good stretch of tracks for us.”

The 1.5-mile Las Vegas track has been particularly good for DiBenedetto and the Motorcraft/Quick Lane team in recent seasons. Last year, he was runner-up in both races at Vegas, and in the six races before he joined the No. 21 team, the Wood Brothers posted four top-10s and no finishes outside the top 15.

“We had a shot to win both races at Las Vegas last year and we still had room for improvement,” DiBenedetto said. “I can’t wait to get there and see how we stack up against the competition. We were strong there last year, and I’m hoping we have the same speed this year.”

But he cautioned that past results are no guarantee of future performance.

“There are a lot of tough teams out there right now,” he said. “A lot of folks are running good.”

DiBenedetto and the No. 21 Mustang will be starting 30th on Sunday. With no qualifying scheduled, the line-up will be set based on recent performances, which have been disappointing for his team. And that’s a big disadvantage, he said.

“It hurts,” he said. “It really does. It messes up your early-race strategy as far as going for Stage points.

“Sometimes it’s well into the second or even the third Stage before you can work your way to the front.

“The [line-up] system puts you behind the Eight Ball, so you just have to go to work and overcome it.”