Success in Sunday’s 500-mile NASCAR Cup Series race at Talladega (Ala.) Superspeedway won’t depend as much on mechanical prowess as it will be about being at the right spot at the right time amongst your friends.

“The rules have changed, but the same racing principles apply,” said Clint Bowyer, driver of Stewart-Haas Racing’s No. 14 Ford Mustang when asked to describe his strategy for Sunday’s race. “It’s all about finding your teammates, finding your allies.”

After 30 years of running restrictor plates on Cup Series engines, NASCAR began using a tapered spacer last year. Both restrict the passage of air to the engine, resulting in reduced horsepower. Although the spacer gives the driver a little bit more throttle response, the draft remains as important as ever. It won’t take many laps for the Ford, Chevrolet and Toyota drivers to join up Sunday, racing in packs and hoping theirs drafts faster than the other manufacturers.

But there’s a catch.

“The worst part is, you know they’re in the same equipment, they’re in that fast Ford Mustang with Roush-Yates horsepower under the hood. You know that. You don’t want to get stuck behind them. You know you’re going to work together and, if you’re behind them pushing, that combination’s going be the best. But you also know, if they’re behind you and pushing you, that’s your best opportunity to win. So, it’s like a game of chess, where you’re trying to utilize your allies and the tools you have in your bag to your advantage.”

The true test of the alliance is when the white flag falls at Talladega, but Bowyer knows his priorities.

“First off, you want to win and you’ll do anything to win,” he said. “If you can’t win, then you want to push your teammate to a win. If that can’t happen, then you push a Ford to a win.”

Bowyer knows what he’s talking about when it’s about winning at Talladega. In 29 career Cup starts there, he’s won twice, posted seven top-five finishes and 13 top-10.

“Obviously, you’ve got to have a little bit of luck not to get caught up in things and, more importantly, be careful not to cause them yourself.”

If he can win Sunday, the celebration that follows could be memorable. He’s carrying the colors of Barstool Sports at Talladega. Bowyer partnered with Barstool president Dave Portnoy this year on the “Rubbin’ is Racing” podcast. Bowyer has also joined Portnoy in his popular One Bite Pizza Review videos, as well as other Barstool activities. 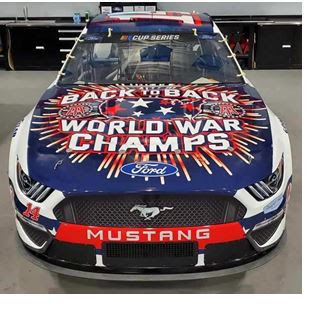 “Talk about pressure,” Bowyer said with a laugh. “I’m sure I’m going to hear about it all week from Dave if we don’t run like we want to run. On the other hand, it would be fun to get a win in the Barstool Ford. Can you imagine that?”

One of those sure to join in a victory celebration is Bowyer’s father Chris, known by everyone in the garage as “Pops.” Bowyer knows a Talladega victory Sunday – Father’s Day – would be his greatest gift to Pops.

“There’s no question the biggest influence in my racing career is my dad,” Bowyer said. “I mean, his work ethic. I learned from an early age – he ran a 24/7 wrecker service. I can tell you line two – I can hear that ring in the back of my mind, like, forever it’s instilled in me.”

Sunday’s race marks the ninth Cup Series race since May 17 and will be run as NASCAR continues to operate since returning from a 10-week hiatus due to the onset of the COVID-19 pandemic. As it did in previous races, NASCAR series and team personnel in the infield will continue to operate under a comprehensive health and safety plan at Talladega that permits no fans, limited crew, strict social distancing, and mandated personal protective equipment and health screenings for all.

Talladega track officials, meanwhile, will allow up to 5,000 guests in the frontstretch grandstands and towers for Sunday’s race. In addition, there will be limited motorhome and fifth-wheel camping spots available outside the track, high atop the Alabama Gang Superstretch.

After finishing 11th Sunday evening at Homestead-Miami Speedway, Bowyer arrives at Talladega 12th in points. If he can get in with the right crowd Sunday, he’ll leave higher in points and perhaps even deliver one of the all-time great Father’s Day presents in Bowyer family history.