In the first two Cup Series events since the onset of the pandemic, both at Darlington (S.C.) Raceway, Custer finished 22nd last Sunday and 31st Wednesday night. Sunday’s race was his first in the Cup Series at the 1.366-mile egg-shaped oval.

Sunday’s Coca-Cola 600 is NASCAR’s longest event of the season, requiring the drivers, crew members and cars to be in excellent shape to go the extra distance. Most NASCAR races are 400 or 500 miles. Even though the Coca-Cola 600 is a grueling race, Custer’s goal is a solid finish. “We need to build consistency in these races and work up from there,” he said. “We’re definitely making gains with this package. It’s just figuring out how to improve every race.”

The traditional Memorial Day weekend event is bringing some normalcy during the COVID-19 outbreak. NASCAR is a longtime supporter of the United States military, and this weekend will be no different. For the past several years during the spring holiday weekend, NASCAR has worked 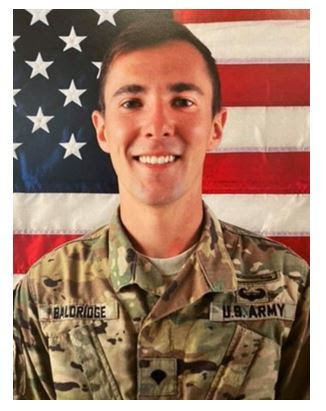 with the families of fallen soldiers to be recognized on each Cup Series racecar. Custer’s No. 41 Mustang will carry the name of Dillon Baldridge, who was an Army sergeant based in Fort

Campbell, Kentucky, and was part of 1-187 Rakassans, 101st Airborne Division. The 22-year-old was killed in Nangarhar Province, Afghanistan, when an Afghan soldier opened fire in an apparent inside attack. The Taliban claimed responsibility for the attack. Baldridge, a native of Youngsville, North Carolina, died on June 10, 2017.

“It’s definitely really cool how we honor the fallen military members on our cars,” Custer said. “NASCAR has always done a really good job saluting the military and everything they’ve done for our country to keep us safe. We wouldn’t be here without the military. Especially during these times, you really appreciate the people who risk their lives for us. I think it’s really cool that we do this and hopefully we can give them a good run.”

While Sunday marks Custer’s first Cup Series start on Charlotte’s 1.5-mile oval, the Ford driver has a good track record there in the Xfinity Series. Even though he hasn’t visited victory lane there, he’s finished inside the top-10 in all seven starts, the only exception being in May 2019.

The California native has one Charlotte appearance in the NASCAR Gander RV & Outdoors Truck series, starting 16th and finishing 13th in 2016.

SHR has 62 Cup Series starts at Charlotte with one victory earned by No. 4 Ford driver Kevin Harvick in 2014. In total, the Kannapolis-based team has seven top-fives, 22 top-10s, and five pole awards there.

Haas Automation, founded in 1983 by Haas, is America’s leading builder of CNC machine tools. The company manufactures a complete line of vertical and horizontal machining centers, turning centers and rotary tables and indexers. All Haas products are constructed in the company’s 1.1-million-square-foot manufacturing facility in Oxnard, California, and distributed through a worldwide network of Haas Factory Outlets.

Even though Custer had a trio of starts in the Cup Series in 2018, 2020 officially marks his Rookie of the Year campaign in NASCAR’s top series. He’s competing for rookie honors with notables Christopher Bell and Tyler Reddick. The three have battled against each other in the Xfinity Series and are making the full-time transition to the Cup Series together.