Clint Bowyer In the New Pandemic World, a Tradition Remains

It seems the COVID-19 pandemic has changed everything in the world, one of the latest examples of which will be the seemingly surreal setting Sunday when Clint Bowyer and the rest of the NASCAR Cup Series drivers and teams arrive at Charlotte (N.C.) Motor Speedway for the 61st annual Coca-Cola 600.

Instead of the usual pageantry in front of 100,000-plus fans in attendance, Sunday’s race, much like the most recent races run at Darlington (S.C.) Raceway last Sunday and Wednesday, will be held under a comprehensive health and safety plan that permits no fans, limited crew, strict social distancing, and mandated personal protective equipment and health screenings for all.

“Nobody likes having things like this,” Bowyer admitted. “But it’s what we have to do to race and be safe. We all hope it will get better soon. Everyone is doing their best now and we’ll get through it.”

Thankfully, at least one Memorial Day weekend tradition remains – the 600 Miles of Remembrance initiative honoring members of the armed forces who gave their lives to their country. The windshield header of Bowyer’s No. 14 Rush Truck Centers/Mobil Delvac 1 Ford Mustang will carry the name of Private First Class Andy Krippner of Garland, Texas, who lost his life in Kunar Province, Afghanistan in 2011. 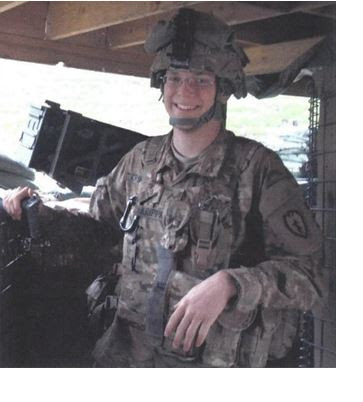 Krippner spent just six weeks in Afghanistan and celebrated his 20th birthday days before his death. Krippner’s medals included the Army’s ribbon for enlisting in time of war, the worldwide fight against terrorism, a medal for shooting, grenade launching, and the Combat Infantry Badge.

“Everyone knows what we are going through right now as a country and it’s easy to get down, but when you hear the stories of Andy Krippner and others who have sacrificed their lives for this country, you get a new perspective,” Bowyer said. “I am incredibly honored to carry Andy’s name on our car and can’t thank him and his family and friends enough for the sacrifices made for our country.”

Krippner lost his life when the Army vehicle he was in hit an improvised explosive device. The other soldiers killed in the attack included SSGT Kristofferson B. Lorenzo, 33, of Chula Vista, California; PFC William S. Blevins, 21, of Sardinia, Ohio; and PVT Thomas C. Allers of Plainwell, Mich. The soldiers were part of the 2nd Battalion, 27th Infantry Regiment, 3rd Brigade Combat Team, 25th Infantry Division, based at Schofield Barracks, Hawaii.

Bowyer’s SHR teammates Kevin Harvick and Aric Almirola will honor Lorenzo and Blevins on their Ford Mustangs Sunday. SHR fabricator Matthew Ridgway – who didn’t know them personally, but joined their battalion after the incident and according to him, “knows them as well as you could know someone you’ve never met based on the stories from fellow soldiers he served with.”

When asked why he felt he had to go at Afghanistan, Krippner responded: “Why don’t you want to go?”

Bowyer and his family understand that type of soldier mentality.

Bowyer’s paternal grandfather Dale E. Bowyer was a first lieutenant in the United States Army. He won the Purple Heart, Bronze Star and Distinguished Service Cross for extraordinary heroism while fighting the armed enemy in Germany during World War II.

The Distinguished Service Cross, awarded for extraordinary heroism, is the second-highest military decoration that can be awarded to a member of the Army. While leading his platoon under heavy fire in an attack near Sinz, Germany, on Jan. 25, 1945, LT Bowyer was severely wounded by an enemy mine. He refused evacuation even though both his feet were shattered.

“His devotion to duty and to his men, and his courage and fearless determination, are in keeping with the highest traditions of the military service,” read the commendation he received. LT Bowyer eventually lost a leg due to his injuries. After his career in the Army, he lived in Iola, Kansas, and worked in the dairy business. He passed away in June 1974.

Charlotte’s 600-mile distance is the longest of any race and includes four stages instead of the standard three, meaning more bonus points are available.

“Everyone gets caught up in the return to racing and rightly so,” said Bowyer. “But these races mean a lot for points and making the playoffs. We need to run up front and get those bonus points and have a strong finish. It’s go time.”

The 1.5-mile Charlotte oval has been kind to Bowyer over the years. He has two top-five and five top-10 finishes in 26 races. One of his 10 career Cup Series victories came on the oval on Oct. 13, 2012. Bowyer led 29 laps and ran out of fuel on his victory celebration lap. His crew pushed the car to victory lane.

In last year’s All-Star race on the Charlotte oval Bowyer won the pole and led two laps, but handling issues left him with a 12th-place finish. Six days later in the 600 Bowyer started eighth, but handling issues plagued him early, then damage from an accident caused by other drivers left him three laps behind the leaders in 24th place.

He enters the Sunday's race ninth in points after finishing 17th and 22nd in last week’s two events at Darlington in NASCAR’s first races since March 8 due to the pandemic. Bowyer ran in the top six most of the race in Sunday’s Darlington race before late-race problems dropped him to 17th. On Wednesday he won the first two stages – a first for a driver in 2020 – and led 71 laps surpassing the 3,000 mark for career laps led. But once again, very late race trouble that saw wall contact and a spin resulted in a disappointing finish.

“I was very proud of the Mustang my guys brought to me in such a short turnaround,” Bowyer said after Wednesday’s race. “The thing just took off behind two cars racing for lucky dog and smoked the wall and blew our night. We keep doing that our day will come.”

Just as it did on last week, Bowyer’s No. 14 Ford Mustang for Stewart-Haas Racing (SHR) will again carry Rush Truck Centers and Mobil Delvac 1 decals at Charlotte, as well as the special social media hashtag #ThankATrucker. The hashtag calls attention to the men and women transporting goods and providing a public service. Rush Truck Centers is considered an essential business by the government with its more than 100 dealerships operating across the country. Mobil Delvac 1 heavy-duty diesel engine oils are designed to help commercial fleets boost uptime. Mobil Delvac 1 oils can help deliver fuel economy savings, extend the life of engines and lengthen oil drain intervals.

Sunday might be the most unusual Coke 600 staged in the race’s 61-year history but there’s likely never been a time Americans have yearned for live sports entertainment. Despite the situation, taking time to remember sacrifices from those like Krippner and others this Memorial Day weekend provides a good reminder of how good we really have it.