Daniel Suárez and the No. 41 Coca-Cola Ford for Stewart-Haas Racing (SHR) will compete in the Monster Energy NASCAR Cup Series season’s longest race at Charlotte (N.C.) Motor Speedway Sunday night. And Suárez will stray from his usual Haas Automation and ARRIS liveries to pilot the red-and-white Coca-Cola Mustang. This weekend marks the second time this season he’ll pilot the No. 41 Mustang with Coca-Cola branding. He finished 12th at Talladega (Ala.) Superspeedway in the Orange Vanilla Coca-Cola scheme.

“This season has been very good so far but I’m looking to turn it into a great season,” Suárez said. “We are moving in the right direction and I’m looking forward to doing even better. We’ve had strong cars over the last month and a half and hopefully I can do my part as the driver and make it a great race this weekend. The one thing I’ve been dreaming about from this race is the amazing vintage Coca-Cola vending machine you get if you win. I really want to bring that thing to my house.”

The traditional Memorial Day weekend event is not only the longest race on the Cup Series tour, it presents an important opportunity to remember fallen service members. The traditional Cup Series windshield headers have been replaced with names of fallen soldiers who paid the ultimate price while serving their country.

Riding along with Suárez this weekend is United States Army SFC Randy Michael Shugart, who received the Medal of Honor Citation. Shughart distinguished himself by actions above and beyond the call of duty on Oct. 3, 1993, while serving as a Sniper Team Member, United States Army Special Operations Command with Task Force Ranger in Mogadishu, Somalia. Shughart provided precision sniper fire from the lead helicopter during an assault on a building and at two helicopter crash sites while subjected to intense automatic weapons- and rocket-propelled-grenade fire. While providing critical suppressive fire at the second crash site, Shughart and his team leader learned that ground forces were not immediately available to secure the site. 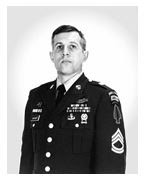 Equipped with only his sniper rifle and a pistol, Shughart and his team leader, while under intense small arms fire from the enemy, fought their way through a dense maze of shanties and shacks to reach the critically injured crew members. Shughart pulled the pilot and the other crew members from the aircraft, establishing a perimeter that placed him and his fellow sniper in a most vulnerable position.

Shughart used his long-range rifle and sidearm to kill an undetermined number of attackers while traveling the perimeter, protecting the downed crew. Shughart continued his protective fire until he depleted his ammunition and was fatally wounded. His actions saved the pilot’s life. Shughart’s extraordinary heroism and devotion to duty were in keeping with the highest standards of military service and reflect great credit upon him, his unit and the United States Army. The heroism of Shughart and Army MSG Gary Gordon, whose name is on Suarez’s SHR teammate Clint Bowyer’s No. 14 Ford for Sunday’s race, were chronicled in the 2001 movie Black Hawk Down.

In the NASCAR Xfinity Series, the Mexican native has made five Charlotte starts with two top-fives and four top-10s, along with one pole position in October 2017. He’s earned a 6.6 Xfinity average starting and finishing position at Charlotte, along with 115 laps led. He also made one NASCAR Gander Outdoor Truck Series start in May 2016.

Fans watching the race on television Sunday will have the opportunity to enjoy a unique view from inside Suárez’s cockpit with an in-car camera provided by Coca-Cola.