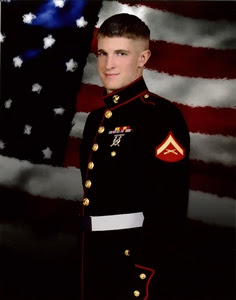 Elrod is the brother of Christopher Elrod, executive vice president and chief financial officer at Concord, North Carolina-based Lionel Holdings LLC. Lionel Holdings is engaged in the design and marketing of model racecars and related accessories for the NASCAR industry.

Harvick’s No. 4 Jimmy John’s Chevrolet SS will feature LCPL Elrod’s name at the top of the windshield for Sunday’s Coca-Cola 600.

Elrod, of Salisbury, North Carolina, discovered at an early age that his true calling was to serve his country as a member of the military. While attending East Rowan High School in Salisbury, he was a member of the ROTC, Raider Team, Drill Team and was a Rappel Master.

He completed his infantry training at Camp Geiger, part of the Marine Corps Base Camp Lejeune complex based in Jacksonville, North Carolina, and received his Military Occupational Specialty as a Machine Gunner. After completing infantry training, he was assigned to 1st Battalion, 6th Marine Regiment, 2nd Marine Division.

Elrod’s first deployment came just six months after completing boot camp, when he was sent to Fallujah, Iraq. The Personal Security Detail securely escorted the Lt. Colonel to town meetings, school openings and meetings with various tribal leaders of Al Anbar Province. While the detail was fired upon numerous times during the deployment, no one in the detail was injured.

The 1st Battalion, 6th Marines were called back early for their second deployment. The Marine Unit they were replacing suffered so many losses that it had to be replaced early. During the period between Sept. 19 and Oct. 21, 2006, Elrod’s battalion came under fire numerous times while providing security for the United States Army.

Elrod skillfully engaged the enemy with his machine gun from the turret of his vehicle and helped successfully defeat enemy attacks on his platoon on Sept. 19, Sept. 24 and Sept. 26.

Elrod courageously provided security for a route-clearing operation on the streets of Ramadi, Iraq on Oct. 20 to 21. He made the ultimate sacrifice for his country when his vehicle was attacked by an improvised explosive device.

Elrod was posthumously awarded the Navy and Marine Achievement Medal with Combat Distinguishing Device for his actions from Sept. 19 to Oct 21.

The Charlotte Military Entrance Processing Station chose Elrod from among all of the heroes from North Carolina who gave their lives to name their Ceremony Room in his memory – The Lance Cpl. Nathan Elrod Ceremony Room.

While Elrod’s name will be proudly displayed at the top of the windshield of Harvick’s racecar on the 1.5-mile Charlotte oval this weekend, Harvick would like to also see the name appear in victory lane at the conclusion of the longest race on the Sprint Cup circuit.

The 2014 Sprint Cup champion is no stranger to victory lane in the Coca-Cola 600, having won the event on two occasions. His first Coca-Cola 600 win came in his 11th attempt in 2011. He was racing in second position on the white-flag lap when race-leader Dale Earnhardt Jr. ran out of gas as he was racing down the backstretch. Harvick was able to take the lead coming off the final corner to win his first Coca-Cola 600. He led only two laps in the race, but the final lap was the most important.

While Harvick would like to score his third Coca-Cola 600 trophy this weekend, if he is successful this Sunday at Charlotte Motor Speedway, it will be in remembrance of Lance Cpl. Nathan Ross Elrod.