Tony Stewart on Sunday enters his final Coca-Cola 600 – the longest race on the NASCAR Sprint Cup Series schedule – as a two-time winner at Charlotte (N.C) Motor Speedway but yet to visit victory lane in the 600. That hasn’t escaped the three-time champion’s attention. 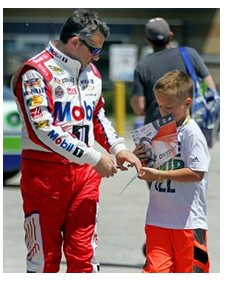 “Any time you win a race at Charlotte, it’s big,” Stewart said. “It’s a speedway with a lot of history and, obviously, the Coca-Cola 600 is a huge event. I’m a big fan of shorter races nowadays, but the 600 is truly a special event with it being on Memorial Day weekend and the history of the 600, back to when it was known as the World 600. There’s just a lot of tradition that surrounds the month of May in Charlotte. So, this is a big race. It’s an important race to win.”

Stewart’s first win at Charlotte came in the October 2003 UAW-GM Quality 500. His second win came in May 2009 in the non-points NASCAR Sprint All-Star Race. While he has yet to add a Coca-Cola 600 trophy to his vast collection, Stewart has come very close, never more so than in 2008. Stewart had a fast racecar in 2008, leading four different times for a total of 23 laps. With seven laps to go, Stewart found himself running in the top spot with a substantial cushion over second-place Kasey Kahne. As the laps ticked down to three to go, so did the air pressure in Stewart’s right-front tire, eliminating him from contention and resulting in an 18th-place finish.

The third-place finish in the 2001 Coca-Cola 600 is Stewart’s best outing – doubly impressive considering his busy schedule that day. Prior to strapping in for 600 miles at Charlotte, Stewart logged 500 miles at the Indianapolis Motor Speedway, scoring a sixth-place finish in the Indianapolis 500. Stewart is still the only driver to record top-10 finishes in both races and to have completed all 1,100 miles between the two events in a single day. Sunday marks his 34th career Sprint Cup start at Charlotte’s 1.5-mile oval where, in addition to the win in 2003, he has a pole, six top-fives, 13 top-10s and has led 701 laps.

Nobody loves racing more than Stewart, but he reminds all this Memorial Day weekend is about honoring the men and women who gave their lives in service to America. The windshield header of his No. 14 Mobil 1 Chevrolet SS fielded by Stewart-Haas Racing (SHR) is usu 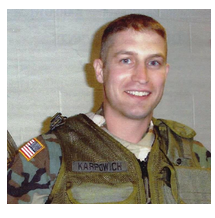 ally reserved for his last name. Instead, the No 14 will honor Master Sgt. Paul D. Karpowich who was one of 22 Americans killed by a suicide bomber in a crowded mess tent during lunchtime in Iraq just four days before Christmas in 2004.

“Men and women like Paul, who died serving our country, are the real heroes in the world and the people who deserve honoring and remembering this weekend,” said Stewart. “It’s more than an honor to have his name on our car.”

Karpowich’s story is as compelling as any of the men and women who’ve given their lives in service to America. He began his military career in the U.S. Army in 1992, immediately after graduating from Bishop Hafey High School in Hazleton, Pennsylvania. He completed basic training at Fort Benning, Georgia and then went on to Fort Bragg in North Carolina, where he graduated from paratrooper school, after which he joined the 82nd Airborne Division.

Sgt. Karpowich served as a drill instructor with the 98th Division’s 1st Battalion, 417th Regiment, 1st Brigade. While assigned to the 82nd Airborne, he deployed to the Sinai Peninsula as a Multi-National Force Observer. He was alerted for deployment to Haiti and was selected to attend the Army’s prestigious Sniper School. Following his four years of active duty, he returned home to pursue a college degree, and reunite with and marry his high school sweetheart, Amanda.

While a member of the Army Reserve, he became a drill sergeant and eventually a senior drill sergeant. He was hand-selected to train new Iraqi troops in Northern Iraq. The apex of his 12-year career came during his deployment to northern Iraq in the fall of 2004. After two weeks of patrols in the dangerous streets of Mosul, Iraq on Dec. 21, 2004, he returned to base for his first hot meal and shower in two weeks. The avid hunter and fisherman had been in Iraq only 27 days.

No. 14 crew chief Mike Bugarewicz and his wife Krysten asked to honor Karpowich this weekend. Krysten’s family knows the Karpowich family in Pennsylvania.

Every car in Sunday’s race will honor a fallen member of the services. The special tribute will commemorate the launch of NASCAR: An American Salute, the industry’s collective expression of respect and gratitude for members of the U.S. Armed Forces, past and present. The track will host more than 6,000 active military members at the Coca-Cola 600 in honor of Memorial Day. During the prerace broadcast at 5:30 p.m. EDT on FOX, all service members who have lost their lives in the past year will be recognized when their names and branch of service will be displayed on a graphic scroll.