Tony’s Stewart’s love of animals would make Dr. Doolittle feel like a slacker. 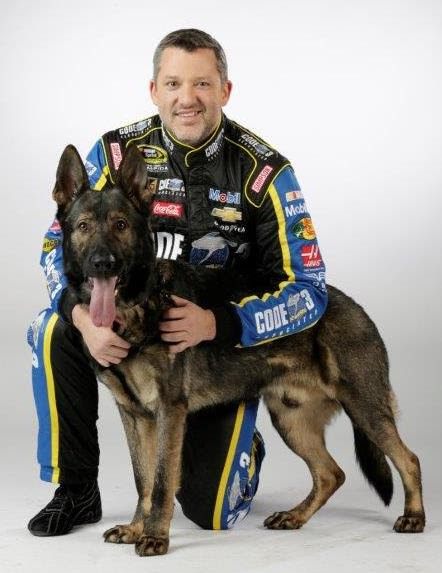 A pig named Porkchop greets you when you ring the doorbell at his house, and the first one out the motorhome door in the mornings at racetracks is often Max – Stewart’s German Shepherd. Both animals became internet celebrities last year when pictures of each napping with Stewart were retweeted far and wide on Twitter. Over the years, Stewart has travelled the NASCAR circuit with Tonkinese cats, small dogs, and even a Patas monkey he later moved to the Louisville Zoo after it took a few too many liberties as a roommate.

Stewart’s love for animals goes beyond just the care and feeding of his own. When the three-time champion established his charitable foundation in 2003, in addition to injured racers, he targeted ill children and at-risk animals as areas of focus.

The stars are aligning for Stewart’s favorite causes this weekend in Delaware as he competes in Sunday’s AAA 400 Drive for Autism NASCAR Sprint Cup Series race at Dover (Del.) International Speedway in the No. 14 Code 3 Associates/Mobil 1 Chevrolet SS for Stewart-Haas Racing (SHR).

Stewart and the Sprint Cup driver council donated $35,000 to Autism Delaware on April 22. Artie Kempner, coordinating director for NASCAR on FOX, founded Autism Delaware with his wife Marcy in 1998. The organization has raised more than $5 million and served more than 1,000 children and adults living with autism. Fellow driver Denny Hamlin will present the check to Kempner at his Drive for Autism golf tournament Thursday in Wilmington, Delaware.

This weekend at Dover, Stewart will be flying the colors of Code 3 Associates for the first time in 2016. Code 3 Associates is a non-profit organization that specializes in animal rescue and recovery in disaster areas and has been a partner of SHR since 2012. Since launching in 1985, it’s been the mission of Code 3 Associates to provide professional disaster response for animals in need and to train individuals involved in animal-related law enforcement and emergency response to safely and effectively carry out their responsibilities to the animals and people in their communities. The organization has evolved from one unpaid volunteer to at least 75 professional responders around the country, which includes animal welfare, law enforcement, fire, EMS and veterinary specialists from the United States and Canada.

Code 3 has worked with the Tony Stewart Foundation to fund many charitable endeavors across the country.

Stewart knows there’s work to be done at “The Monster Mile” in addition to raising awareness for charitable activities.

Sunday will mark his fourth race of the 2016 season. Stewart missed the first eight after sustaining a burst fracture of the L1 vertebra in a Jan. 31 all-terrain-vehicle accident. He returned to the No. 14 April 24 at Richmond (Va.) International Raceway, where he finished 19th. Stewart drove the first 52 laps at Talladega (Ala.) Superspeedway on May 1 before, under doctor’s orders, turning the driving duties over to Ty Dillon, who earned a sixth-place finish – a season best for the No. 14. Last weekend at Kansas Speedway in Kansas City, Stewart led 12 laps – the No. 14’s first laps led this year – on his way to a 12th-place finish.

Every race matters to Stewart in 2016 as he seeks a victory and enough driver points to qualify for NASCAR’s 2016 Chase for the Sprint Cup. NASCAR granted Stewart a medical waiver in April that made him eligible for the sport’s 10-race playoff. To make the Chase, Stewart will have to race his way in by winning at least once and ending NASCAR’s 26-race regular season in the top-30 in driver points. Right now, Regan Smith is in 30th place with 146 points. Stewart is 37th with 87 points.

Dover could be the just the place for Stewart to take a big step toward earning that playoff spot. His last Sprint Cup victory came at Dover in June of 2013 – driving the Code 3 Associates paint scheme. His next victory could well come at Dover, as well, if history is predictive of future results. He owns three wins, 11 top-five finishes and 17 top-10s and has led 1,075 laps in his 33 career Sprint Cup starts on the Delmarva Peninsula.

Dover this weekend will be about kids, animals and hopefully a Stewart victory.