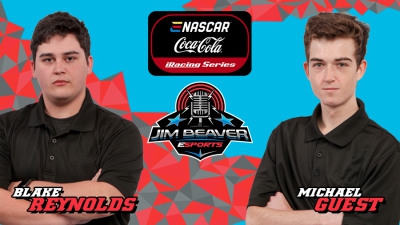 Jim Beaver eSports is pleased to announce that Blake Reynolds and Michael Guest will compete on its eNASCAR Coca-Cola iRacing Series team for the 2022 season. Reynolds, a 2019 Championship 4 playoff driver, will compete for the franchise in its fourth season in the series, while Guest returns after a stellar 2021 season in which he was in the playoff conversation all year long. Full details on each driver’s Ford Mustang will be released in the buildup to the 2022 season opener from Daytona International Speedway in February.
“Blake and Michael are no stranger to the front of the eNASCAR Coca-Cola iRacing Series pack, but that’s just one of many reasons I’m excited to name them to Jim Beaver eSports’ 2022 eNASCAR lineup,” said team owner Jim Beaver. “Blake’s excitement for both our program and the Next Gen car, and willingness to work together with us in worlds beyond eNASCAR, are tailor made for the organization that we’ve built. Add that to the continuity of picking up where we left off with Michael last year, where we had a serious opportunity to make the playoffs, and we couldn’t be happier with what we’ve put together for this year!”
“I’m really excited for this new opportunity with Jim Beaver eSports,” said Reynolds. “It’s a whole new experience that feels a lot more genuine and handcrafted. It’s a partnership I feel I need to bring in this new era of stock car racing with the Next Gen car arriving this season for the eNASCAR Coca-Cola iRacing Series.”
"I couldn't be more excited to be back here at Jim Beaver eSports to give it another go in 2022,” said Guest. “Last year we had a lot of success, nearly winning a few races with great consistency that almost got us into the playoffs. I’m looking to improve on what we've built the past year and make a run for it!"
Guest and the #9 Jim Beaver eSports Ford Mustang were a mainstay towards the front of the grid last season. A second place finish in the season opener from Daytona kicked off a year where the Indianapolis native was often in the hunt for the points lead during the regular season. After guaranteeing his license through a career-best 14th place points finish, 2022 will mark Guest’s fifth year in the series.
A Houston native, Reynolds is entering his sixth eNASCAR season in 2022. As a third-year driver, Reynolds broke out in 2019 to the tune of seven top-five finishes, the regular season points lead, and an opportunity to compete for the series championship in the season finale at Homestead-Miami Speedway. The 2018 Road to Pro Contender Series champion is coming off of another top five finish in Contender Series points in 2021.
Outside of eNASCAR, Reynolds was also the champion of the 2018 Majors Series, a premier series of independent iRacing events that tests drivers’ mettle across numerous different disciplines, and Guest is a multi-time former iRacing Rallycross World Championship competitor. Such versatility is familiar within the JBeS camp, which has long held a presence across iRacing’s oval, dirt oval, and dirt road series. The team has also fielded entries in iRacing pro series based around World of Outlaws, USAC, and rallycross, and its full-time drivers manage iRacing’s most successful independent series utilizing the NASCAR Whelen Tour Modified, Pro 4 and Pro 2 short course trucks, and rallycross.
The eNASCAR lineup announcement completes a major week of news for Jim Beaver eSports. On Wednesday, it was confirmed that all three events of the General Tire eShort Course Triple Crown for 2022 will be broadcast on the CBS Sports Network, after streaming live to iRacing social media channels. The action kicks off on January 19 with the General Tire eShort Course World Cup Fueled by Fistful of Bourbon. Drivers looking to compete may register here.
Additional announcements on Jim Beaver eSports’ 2022 eNASCAR Coca-Cola iRacing Series program will be made in the coming weeks. For more information, follow Jim Beaver eSports on Facebook and Twitter.
Rate this item
(1 Vote)
Tweet
« eNASCAR Coca-Cola iRacing Series Returns with New Tracks in 2022 de Tullio, Clark Take Wins in TireRack.com eSeries Opener »