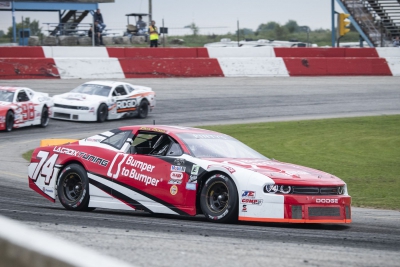 The NASCAR Pinty's season will conclude this weekend at Delaware Speedway in what will certainly be an action-packed event. The Bumper to Bumper crew is gearing up for three events, as the series pushed the cancelled Flamboro Speedway race to this coming Friday.

Kevin Lacroix's goal will be to get as many wins as possible, as his championship chances are slim. "I'm in sixth place in the championship standings after my bad luck at Flamboro Speedway," said the driver of the #74 Bumper to Bumper  / Lacroix Tuning car. "I don't think I can win the title this season, but I hope to collect three wins!"

The Saint-Eustache-based team did not travel to Delaware Speedway this season to test, but that doesn't bother Lacroix; "In 2017, I had a great race until a competitor decided otherwise." Lacroix had qualified in 2nd place and took the lead early in the race before an incident in the pit lane stopped his momentum.

Delaware Speedway is a half-mile paved oval on the outskirts of London, Ontario. It has been open for over 60 years and is a well-known family destination in Ontario where fans are always sure to have a great show.

This time around, there will be three events that will capture the attention of spectators. First, the Canadian Tire 125 on Friday at 9 pm. Followed by the two final events on Sunday; the Quick Wick Firestarter 125 at 3:55 pm and the Pinty's Fall Brawl 150 at 5:20 pm. All events will be broadcast live on the TSN Canada app.

"It will definitely be an intense end to the season with three events in one weekend, but I can't wait!" concluded Lacroix.