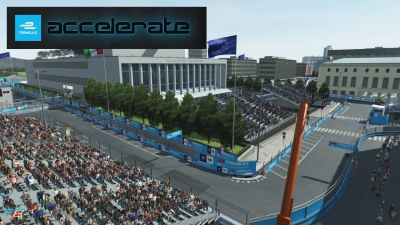 The Grand Final of Formula E: Accelerate Season 1 will see the best sim racers in the world fighting it out to be crowned champion this Thursday, 25 March at 19.00 GMT.
The six race esports series – featuring 24 of the fastest sim racers and all 12 real-world ABB FIA Formula E World Championship teams – comes to its conclusion with Erhan Jajovski (representing ROKiT Venturi Racing), Frederik Rasmussen (DRAGON / PENSKE AUTOSPORT) and Kevin Siggy (BMW i Andretti Motorsport) battling for the title, as well as a drive in a real-life Gen2 car and a share of a minimum €100,000 prize pool.
Jajovski now holds a 26-point lead over closest rival Rasmussen, the equivalent of a race win and fastest lap. However, the Grand Final sees double points up for grabs, meaning there is a total of 56 points to play for.
The sim racers will take on a new circuit, with the Grand Final set in the Eternal City of Rome, a Formula E driver favourite, known for its unforgiving bumps and fast straights. Set beside historic surroundings like the Palazzo dei Congressi and the Piazzale Marconi, the new track is available on rFactor 2 following the show.
Alongside the all-action racing, the Grand Final show will feature 12 real-world Formula E drivers competing against each other on the Rome track, just two weeks before the real-world Rome E-Prix.
Race At Home winner Stoffel Vandoorne will be racing, alongside Season 6 Champion António Félix Da Costa, in an effort to earn Formula E: Accelerate Team Standing points, which will go towards the Formula E: Accelerate Team Championship.
TAG Heuer Porsche Formula E Team driver Pascal Wehrlein will also be competing in the race and will be giving his views on Season 7 so far, fresh from his two points finishes in Diriyah, alongside DS TECHEETAH Team Principal Mark Preston and YouTuber and online gamer FailRace.
Rate this item
(1 Vote)
Tweet
« Back to Virtual Reality: IMSA iRacing Pro Series Returns in April eShort Course Triple Crown Continues April 15 With Pro 4 Round at Bark River »