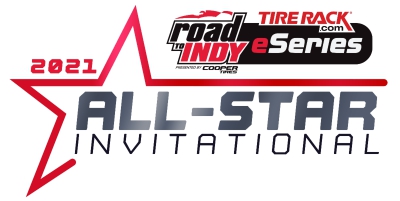 The final event of the TireRack.com Road to Indy iRacing eSeries Presented by Cooper Tires will add a new twist to its regular Wednesday night outing with an All-Star Invitational to be held virtually tomorrow at World Wide Technology Raceway. The line-up will see Road to Indy graduates take on up-and-coming talents in a pair of 20-minute double-header races.
The 10 guest drivers include former Road to Indy champions Matthew Brabham, Gabby Chaves, Spencer Pigot, Aaron Telitz and Tristan Vautier as well as graduates James Davison, Peter Dempsey, RC Enerson, Dalton Kellett and Stefan Wilson. The mix represents a variety of motorsports disciplines including the NTT INDYCAR SERIES and IMSA as well as team ownership with Dempsey’s successful Turn 3 Motorsport, which competes in both the Indy Pro 2000 Championship Presented by Cooper Tires and the Cooper Tires USF2000 Championship.
The top-five finishers in the five-event TireRack.com eSeries, which concluded this past Wednesday, are also represented on the entry list. Led by eSeries champion Max Esterson, they also include Bryson Morris, Mac Clark and Michael Myers. Braden Eves, who finished third, will miss the All-Star race due to a schedule conflict.
Returning to represent the World Karting Association is the WKA’s A-Maxx Racing eSports Series Champion Dean Dybdahl.
"I'm really excited to see how the All-Star Invitational event plays out as we pit so many of our successful Road to Indy graduates against a group of our current Indy Lights line-up and our top Road to Indy eSeries finishers," enthused Rob Howden, Road to Indy Series Development Director. "I want to thank all of our grads for carving out the time to have some fun with us, and for participating in this opportunity to celebrate those who exemplify what the Road to Indy is all about. It's going to be a fun night and, hopefully, the beginning of an annual gathering of our drivers, current and past."
Click for entry list
While only bragging rights are on the line for the All-Star Invitational, the TireRack.com eSeries has provided an entertaining segue to the start of the real racing season which, for the Road to Indy, kicks off with its Annual Spring Training at Barber Motorsports Park on April 4-6.
Coverage from a virtual World Wide Technology Raceway can be found on the Cooper Tire Facebook page, the Road to Indy TV website and App, ApexRacingTV’s YouTube and Facebook and the series’ respective websites. In addition, one-day, tape-delayed coverage will be carried by REV TV Canada.
Rate this item
(0 votes)
Tweet
« Esterson Clinches TireRack.com eSeries Title with Mid-Ohio Win Season 2 of INDYCAR iRacing Challenge to Take Green Flag March 18 »