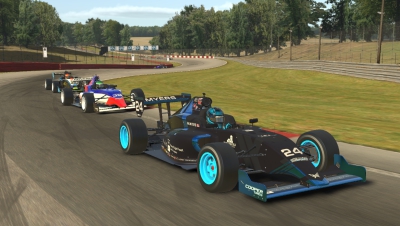 Teen-aged New Yorker Max Esterson clinched the TireRack.com Road to Indy iRacing eSeries Presented by Cooper Tires crown with a fine victory in the first of today’s final two 20-minute simulated races at the Mid-Ohio Sports Car Course. Fellow iRacing expert Andre Castro, also from New York, took advantage of the reverse grid pole position to romp to a clear win in the finale.
Esterson’s third victory was enough to clinch the championship, along with a $2,000 first prize, by a commanding 48-point margin over Bryson Morris, from Mount Juliet, Tenn., who finished seventh and fifth. Of the 37 racers who started at least one race, Morris was the only driver to finish among the top 10 in all 10 races.
Esterson set the fastest time among the 26-car field in the initial qualifying session, only for his regular iRacing teammate – and local Ohio favorite – Braden Eves to turn the tables in the final top-six qualifying to secure his third SimMetric Driver Performance Labs Pole Award of the season.
Eves (Exclusive Autosport), from New Albany, Ohio, duly held the lead at the start, but remained under intense pressure from Esterson until an unfortunate incident on the second lap resulted in Esterson moving to the front, where he remained throughout the 16-lap race. Eves resumed in seventh but his car had sustained virtual damage, causing him to slip down the order to 12th by the finish.
Canadian Mac Clark took advantage of the fracas to move into second. He eventually crossed the line just over two seconds behind Esterson for his second podium finish of the season.
Australian Road to Indy and NTT INDYCAR SERIES veteran James Davison finished a relatively lonely third, clear of Turn 3 Motorsport’s pair of Cooper Tires USF2000 Championship drivers, Josh Green, from Mount Kisco, N.Y., and Dylan Christie, from Princeton, N.J.
Michael Myers, from Lizton, Ind., took sixth ahead of Morris, Keawn Tandon, from Calabasas, Calif., Los Angeles-based Russian Indy Lights Presented by Cooper Tires driver Nikita Lastochkin and Castro, whose 10th-place finish ensured him of the coveted inside front row starting position for Race Two.
Castro made an exemplary start to the finale, quickly pulled out a couple of seconds over fellow front row starter Lastochkin, then maintained his lead impressively to secure his first win of the year.
Lastochkin provided an excellent bookend to his campaign with a well-earned second, backing up his third-place finish from the opening race at Road America last month.
The best scrap of the race was for third place. Tandon held the position initially until Myers found a way through on Lap 10. But Christie was in the mix too, having narrowly avoided a first-lap incident which took teammate Green, Davison and Esterson (who was assessed a drive-through penalty for his part in the melee) out of contention. Christie found a way past Morris on Lap 10, then displaced Tandon two laps later before executing a textbook pass at Turn Four on the final lap to wrest away the final podium position ahead of Myers and Morris.
Simon Sikes (Marotti Autosport/Legacy Autosport), from Augusta, Ga., was equally impressive in fighting his way from 23rd on the grid to sixth to snag the Sabelt Hard Charger Award – and a pair of Sabelt Hero racing gloves.
Myers’ disappointment at narrowly missing out on a third podium finish of the season was tempered by the knowledge that his sixth and fourth-place finishes on the day were enough to vault him into the top-five of the final points table. Myers, alongside the top-five finishers, thereby secured an entry into the All-Star Invitational to be held next Wednesday, March 10, at World Wide Technology Raceway. The event will feature a host of former Road to Indy drivers and champions and will be the final “virtual” race prior to the start of the “real-world” Road to Indy Presented by Cooper Tires season at Barber Motorsports Park in Leeds, Ala., on April 16-18.
Provisional championship points after 10 of 10 races:
1. Max Esterson, 211
2. Bryson Morris, 163
3. Braden Eves, 158
4. Mac Clark, 138
5. Michael Myers, 125
6. Max Kaeser, 123
7. Josh Green, 120
8. Keawn Tandon, 113
9. Benjamin Pedersen, 112
10. Nikita Lastochkin, 111
Max Esterson (#42 Max Papis Innovations/Amity Search Partners Tatuus PM-18): “I was a bit worried qualifying P2. As everyone knows, it is pretty hard to pass here. I knew that if I could exit the Carousel on the first lap within a half a second, I would have a chance either going into the Keyhole or Turn Four and that's what happened. I would like to thank Max Papis Innovations, Amity Search Partners and the Road to Indy for letting me in because obviously I am not an official Road to Indy driver yet.”
Andre Castro (#77 Metalloid/Legacy Autosport/Marotti Autosport Tatuus PM-18): “It was nice to start on pole and have that clean air and just go from there. This week was the first time that I raced with a new sim and the difference was crazy and it was challenging to adapt to. The only practice I had were the 30 laps before the race. In practice and qualifying, I was just trying to figure it out and made a few mistakes. Now I am happy with my set up and looking forward to getting better with it. It was a great race. As always, thanks to Legacy Autosport, Will Marotti and Mike Meyer. I wanted to do something cool in the last race of the e-season as I feel I had some pretty bad luck and that was pretty much the best way to do it.”
Rate this item
(1 Vote)
Tweet
« TireRack.com iRacing eSeries Heads to Season Finale TireRack.com eSeries Wraps Up with All-Star Invitational »