The Trans Am by Pirelli Esports Championship drivers delivered a double dose of thrilling Trans Am action on the virtual Daytona International Speedway on Saturday.   In a field full of multiple champions, including 2004 NTT IndyCar Series champion Tony Kanaan, Tyler Kicera (No. 4 Howe Racing Ent/Carbotech Brakes) and Ernie Francis Jr.  (No. 98 One South Florida Wealth Advisors) tamed the high banks of Daytona to clinch wins in the nail-biting esports doubleheader event.   “Both races were great,” said Francis Jr. “A podium in both and I am happy with that. It was a great day for points. I like this style of racing a lot. I’ve spent a lot of time on the sim the past few weeks with the eracing that Trans Am is doing. It’s a lot of fun, and I’m really enjoying it more and getting faster every week.”    The day started out just as close as it ended with the top nine drivers all clocked times under 1:45-seconds. Francis Jr. claimed pole-position for Race 1 after edging out Kicera by .086-seconds in the final seconds of the 10-minute qualifying session with a fast time of 1:44.313-seconds.   As the lights extinguished on the non-traditional Trans Am standing start, Kicera was the fastest off the line and quickly took the lead over pole-sitter Francis Jr. on the opening lap.   Francis Jr., with Kicera still in sight, refocused his efforts on holding onto second place as eseries points leader Josh Hurley pressured the six-time Trans Am champion from behind. The two diced back and forth for multiple laps until Hurley, using Francis Jr’s slipstream, swung his No. 03 Jetco Racing/McAleese & Assoc machine to the outside of Francis Jr., sliding into second place. 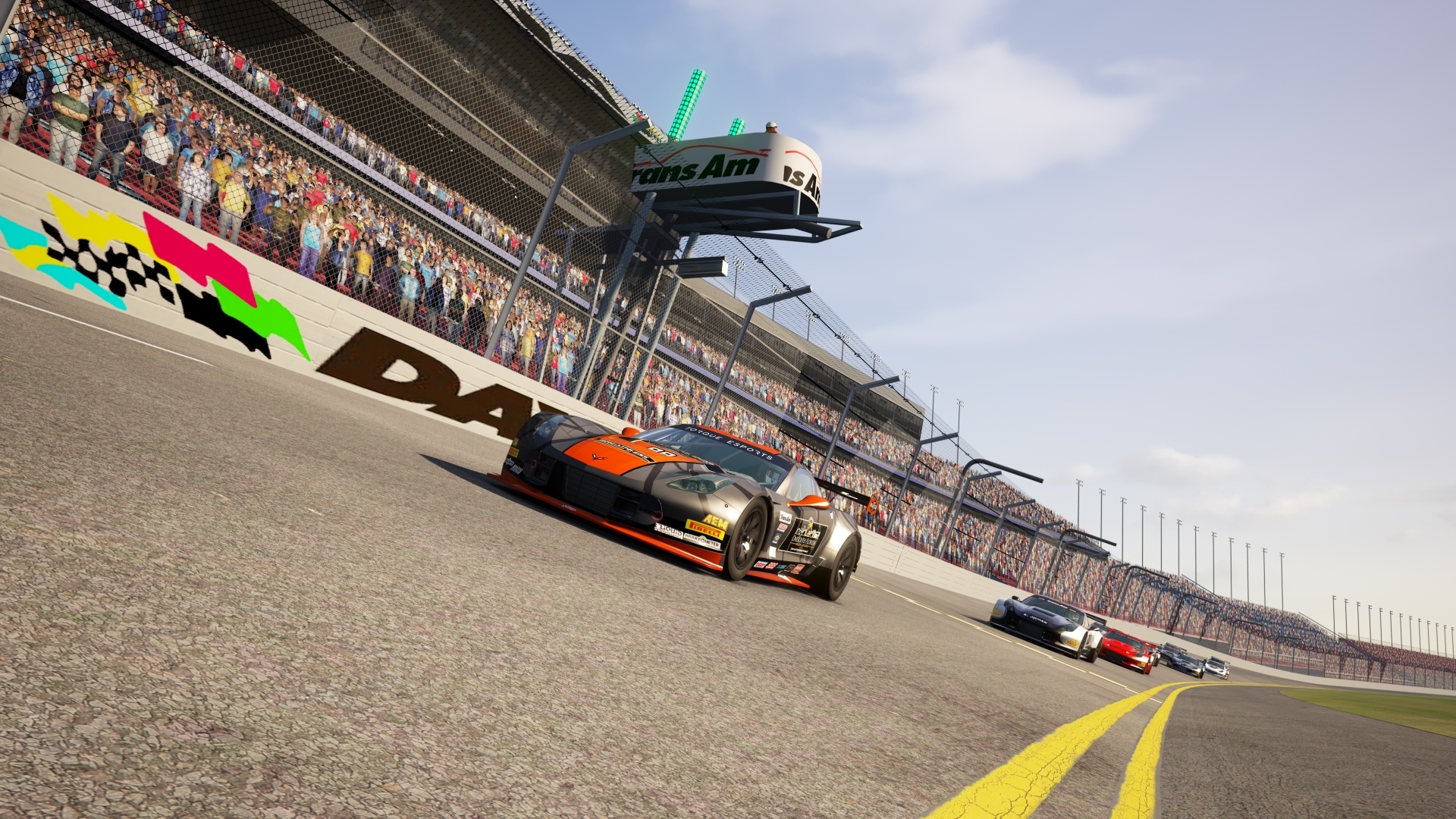 But, Francis Jr. paid back the favor exiting Turn 1 on the same lap. Not backing down, Hurley made his final move on Francis Jr. in Lap 8. Bump-drafting through NASCAR Turn 2, Hurley dove into second place for the final time.   With three laps left, Hurley started to chip away at Kicera’s lead. On the final circuit, Hurley turned up the heat on Kicera. With Hurley’s nose glued to Kicera’s bumper, the two snaked through the flatout turns onto the high banks of NASCAR Turns 3 and 4. There the pair were side-by-side, drag racing style hurling into the final turn. Speeding to the finish line, Hurley’s wheels briefly locked with Kicera, slowing the two-time Trans Am Esports winner’s progress.   In the closest finish so far in the series, Kicera crossed the line .039-seconds ahead of Hurley for the win. Francis Jr. finished just .759-seconds after Kicera for third.   “I was sweating it the whole time,” said Kicera. “I knew Ernie Francis Jr. and Josh Hurley were going to be fast, and they were with me the whole race. I really thought that whoever got the lead on the first lap without making a mistake was going to be in the best position to win. Once I got the lead, I tried not to make mistakes. Coming to the last lap, I thought I was going to have a good gap, but all of a sudden Hurley was on me and it was pretty much nose to tail from there, but I managed to stay ahead by a nose. It definitely was the closest finish I’ve had racing virtually. I’ve had some pretty close finishes in Spec Miatas, but this one got my heart.”   TA2® powered by AEM rookie Kent Vaccaro (No. 26 Adirondack Radiation Therapy) started pole postion with two-time TA2® champion Cameron Lawrence sharing the front row for the second race which featured an inverted grid. Off the standing start, cars were nudging and bustling for position. Vaccaro was clipped from behind and went skidding sideways, allowing Lawrence to take the lead unscathed.   Finding holes through several incidents in front of him, Francis Jr. dodged debris and incidents, driving from an eighth-place start to third in the opening lap. By Lap 6, Francis Jr., in second place, got a good run on Lawrence through NASCAR Turns 1 and 2 to close the gap. Making a classic overtake move using the draft entering the Bus Stop, Francis Jr. made it stick to take the lead. 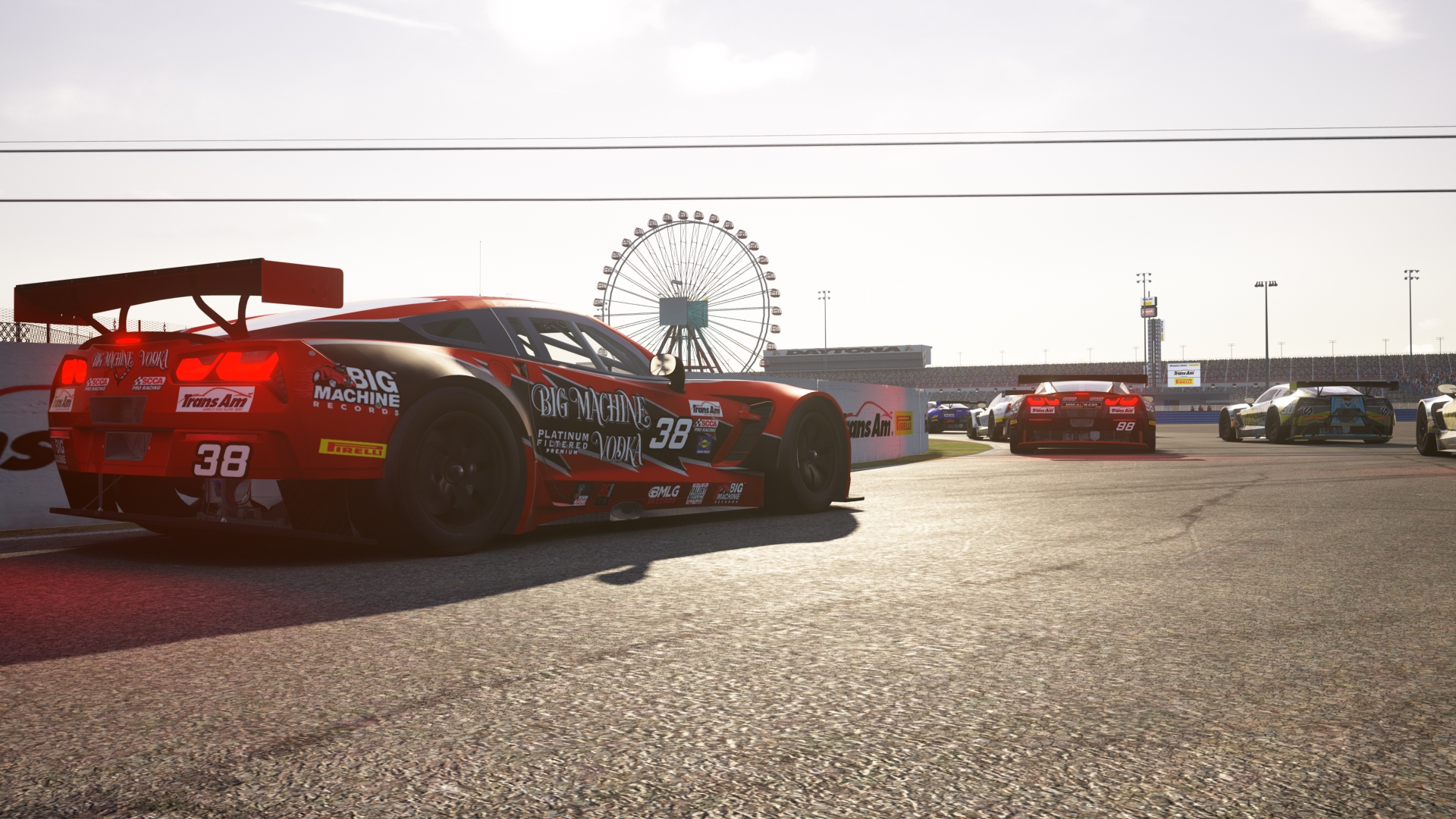 Francis Jr. dominated the second half of the race to build more than a two second lead to finish the 20-minute round uncontested for his first win in the esports championship. Charging from a 10th place start, Hurley crossed the line in second with Lawrence finishing in third.   “Another interesting day,” Lawrence commented. “It was fun racing with Ernie (Francis Jr.), Tyler (Kicera) and Josh (Hurley). I know that I can race side by side with them. They’re fast, but they understand the game and know how to give people room.”   In three rounds over the course of six races, Saturday was the first time Hurley didn’t find himself on the top step of the podium. However, his performance on Saturday was just enough to keep him on top of the standings heading into Round 4. He leads the championship with 173 points, seven points ahead of Kicera.   “That was a frustrating day,” Hurley said after the event. “Qualifying put us behind the eight ball, otherwise I think we would have had a big win in Race 1. This was the most fun racing we’ve had. It takes about four laps to clear someone from a draft if they don’t make mistakes. Which was like real life Daytona. The racing is a lot of fun, but when battling for points and you’re fast, that style of close racing is frustrating. Hopefully, I won’t go one more race without a win.”   Kanaan finished in points position in both rounds in his Trans Am racing debut. 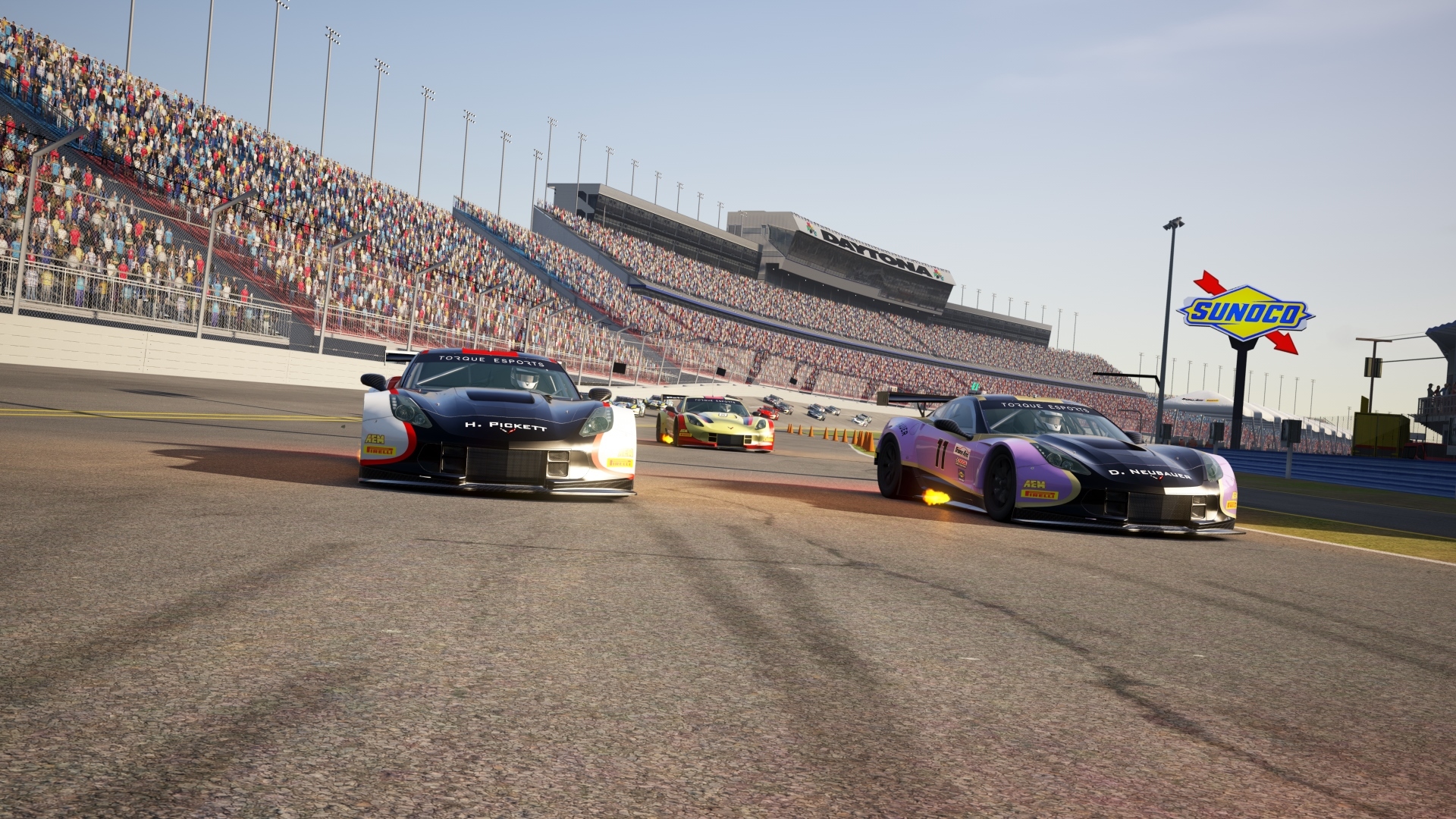 The esports championship follows the same scoring as the regular Trans Am season with the top drivers fighting for more than $20,000 in cash and prizes.    Round 4 of the Trans Am by Pirelli Esports Championship continues Sunday, May 17 at 3:00 p.m. Eastern. Fans will vote on where the series travels to next, starting Monday on social media.   Results: https://bit.ly/3dsVeFt   Full replays of the race can be found by downloading the Trans Am by Pirelli app for free: Android: https://play.google.com/store/apps/details?id=com.nagra.ion.transam&hl=en_US Apple App: https://apps.apple.com/us/app/trans-am-by-pirelli-racing/id1494720210